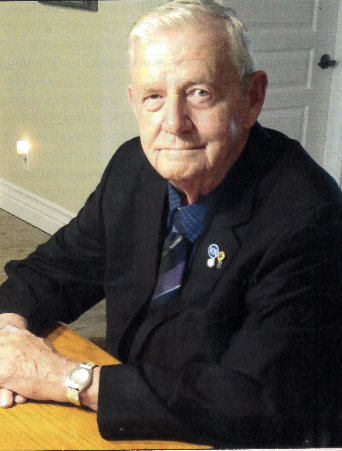 It is with broken hearts the family announces the sudden passing of Gerald Veale, on October 22nd, 2022 in his 85th year. Jerry was the beloved husband of the late Helen Veale (2013). Loving father of Deborah (Doug) McKay. Jerry was the proud and devoted grandfather of Janice (Trevor) Cuthbert and Stacey Sim. Special Papa to Callie and Ethan Cuthbert, Mackailyn and Kyleigh Sim, all of Ingersoll and Woodstock. Jerry is survived by his sister Janet McDonald of Woodstock.

Jerry will be sadly missed and always remembered by his special friend Betty Pearce of Strathroy.

Jerry was born to his late parents Howard and Winifred Veale on November 12, 1937. He is also predeceased by his step-mother Luella Veale. Jerry worked for CP Rail from 1955 until 1976 as a telegraph operator and train dispatcher. Jerry owned and operated Sandy Ridge Orchards from 1976 until 1997. Jerry joined the Mt. Brydges Lions Club in 1965 and was still a member until his passing. Jerry served on the Caradoc Delaware Fire Insurance Board from 1997-2007. Jerry dedicated countless hours volunteering with VON Middlesex Elgin Board of Directors from 2014-2018 and The VON Walk Committee since 2014. Jerry was the co-chair 2017 until 2018, where he was still a very active VON volunteer within the community and will be missed by many.

Visitation will take place at DENNING’S OF STRATHROY on Wednesday, October 26th, 2022 from 2:00p.m. until 4:00p.m. and 7:00p.m. until 9:00p.m. A Lion’s Service will take place at 6:30p.m. A funeral service will be held Thursday, October 27th, 2022 at 12:00p.m. at the funeral home. Interment to follow at Mt. Brydges Memorial Gardens Madill Cemetery (3351 McEvoy Road). As expressions of sympathy, donations may be made to the Middlesex- Elgin VON, Strathroy Salvation Army, or a charity of one’s choice. Online condolences and donations may be left at www.strathroyfuneralhome.com.

Share Your Memory of
Jerry
Upload Your Memory View All Memories
Be the first to upload a memory!
Share A Memory