Bill and Brett Denning grew up above the funeral home in Strathroy and both had a strong desire from early ages to be a part of funeral service. We stand behind our reputation and will continue to serve our community with the values instilled by our funeral directors.  We strive to be better at everything we do.  Our professional care, value for service and our custom built Advanced Estate Care and Gifted Legacy brands have made us one of the most unique funeral and cremation providers in Canada. 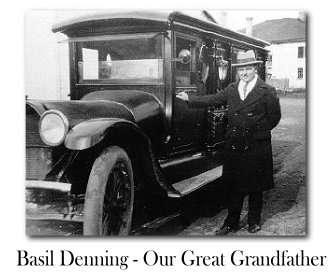 The Denning family has been involved with funeral service since 1925. Basil Denning (originally from Napier) along with his brother Forest opened a furniture store and undertaking business in Strathroy. Bill and Brett Denning grew up above the funeral home in Strathroy and both had a strong desire from early ages to be a part of funeral service. Upon completion of their formal training, the brothers worked for different reputable firms before purchasing the Harper Funeral Home in Watford. A few years later, the boys acquired the Ronn E. Dodge Funeral Home in Forest. Shortly after, the sale of Padfield Funeral Homes in Rodney and West Lorne took place. In 2014, Bill and Brett became the fourth generation owners of their family funeral home in Strathroy.  They also acquired T. Stephenson & Son Funeral Home in Ailsa Craig (The third oldest funeral home in Ontario!).   We are honoured to carry on this tradition and proud to be a part of these six wonderful communities.

Our family has been in the West Middlesex, East Lambton areas since the 1800's. The Denning family came from Ireland and settled in the Napier area. Our great grandmother was a Wilson from Arkona. Her father, David Wilson along with his brother Rueben owned the Arkona Flour Mill delivering flour to Parkhill, Kerwood, Petrolia, Wyoming and Forest. Great grandparents Alice (Wilson) Topping and Laverne Topping ran the Keyser General Store for many years.