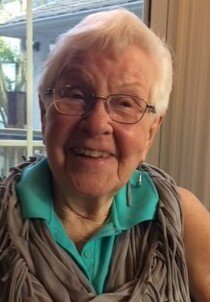 Norma graduated from Toronto General Hospital, School of Nursing, and enjoyed a nursing career for more than 40 years.  Her career in nursing took her to the Northwest Territories, Nunavut, and Southwestern Ontario.

Cremation has taken place.  A Memorial Service will be held at St. Aidan’s Anglican Church, 1246 Oxford Street West, London, on Wednesday, July 20, 2022 at 11 a.m.  For those who are unable to attend the service, a livestream will be available on this page beginning at 11 a.m. on July 20th.  Friends are welcome to join family members to continue the celebration of Norma’s life at a reception immediately following the service in the Parish Hall.  In lieu of flowers, donations may be made to Anglican Diocese of the Arctic, or a charity of your choice.

The family wishes to thank the staff of Dearness Home, London for the loving care and attention they provided to Norma during her stay there.

Arrangements entrusted to Denning’s of Strathroy (519-245-1023).  Condolences can be shared online at www.strathroyfuneralhome.com

Share Your Memory of
Norma
Upload Your Memory View All Memories
Be the first to upload a memory!
Share A Memory