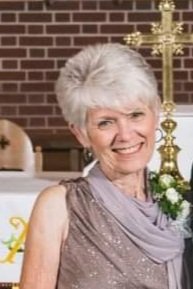 Peacefully passed after a lengthy illness, with family by her side, on July 16th, 2021. Beloved wife of Edgar Ferguson for 61 years. Survived by her son Keven (Ruby) and her daughter Karisa. Cherished grandmother of Kyle (Kim), Brandan (Sharon), Justine, Jasmyne (Mike), Meghan (Joel), Morghan (Isaac), and Tyler. Proud great-grandmother of Thomas, Naomi, Jaxon, and Durell. Predeceased by her parents Marg and Tony Brandies, her brother Jerry and brother-in-law Jack. Survived by her sister Mary Galipeau and her sister-in-law Bonne Brandies.

In keeping with Betty’s wishes, cremation has taken place and a private family service will be held at a later date.

In memory of Betty, call an old friend or give someone a hug.

Arrangements entrusted to DENNING’S OF STRATHROY. As expressions of sympathy, donations may be made Strathmere Lodge Auxiliary. Online condolences and donations may be left at www.strathroyfuneralhome.com.

Share Your Memory of
Elizabeth
Upload Your Memory View All Memories
Be the first to upload a memory!
Share A Memory